During a recent interview with one of our top Enterprise SDRs at Cognism, an interesting fact was shared.

Just in passing, he mentioned that he never uses text when communicating with prospects on LinkedIn.

Instead, he only ever uses voice notes. 🗣

Because he realised the majority of SDRs aren’t utilising them, and if he started doing so, then his messages would stand out from the sea of other SDRs trying to catch their prospects’ attention..

More importantly, he discovered that he got a better response rate when using voice notes versus regular text-based messages.

This got us thinking: could LinkedIn voice notes be the next tool to add to your prospecting kit? And if so, then how should you be using them? 🧰

To answer these questions, we did a little digging and discovered that a few Cognism SDRs have already been making the most of this feature. Jonathan Bugg being one of the standouts having success.

He has shared his experience and insights using LinkedIn voice notes with us. Keep reading to get the low-down! 👇

How do LinkedIn voice notes work?

It’s a simple question with a simple answer - voice notes are limited to 60 seconds.

This may feel short, but the good thing about this limit is it means you have to keep your message concise; you’re less likely to annoy a prospect by not giving them a never-ending vocal sales pitch.

You’re also only able to send these voice notes to those you’re connected with on LinkedIn - to clarify, that’s 1st connections only.

So don’t think you can fire off hundreds of voice notes to people who haven’t confirmed their connection with you - LinkedIn won’t allow it! 🔗

But on the flip side, if your prospect has already openly accepted your invite to connect, they’re probably open to listening to your short voice note.

Jonathan told us he’ll have a look at who has accepted his LinkedIn requests, give it a day or two, then send them a voice note through the LinkedIn app on his phone.

“I don’t message them straight away. I look up a bit about them first, so I can personalise the message for who I’m speaking to.”

“I tend to keep my voice notes shorter than the time limit too, usually around 45 seconds. I just think the longer they are, the less likely the prospect is to listen to it.”

“There was a time when most of my meetings came from LinkedIn voice notes, and I still get a lot of success from them now that I’m working in enterprise. I just think it's a little more intriguing. I got two meetings this week from them.” ✅

How to use voice notes

LinkedIn voice notes work very similarly to any other voice note - you hold down the button to record your message on your phone and send it to your target recipient.

That isn’t the tricky bit.

What gets a little more difficult is the message itself.

How can you say what you need to say in a way that inspires your prospect enough to reply to you, in less than 60 seconds? ⏰

Having an idea of what you’re going to say in advance can help with this - but be careful to avoid just reading off a piece of paper.

Jonathan warns he has received voice notes from other people in the past that actually put him off getting in touch - that’s a B2B sales fail!

“You could tell he was just reading off a sheet, it was so obvious. It takes away any novelty of receiving a voice note. It makes you sound like you’re just ticking boxes.”

Instead, Jonathan tries to keep messages light and conversational. Something along the lines of:

“Thanks for connecting! Here is a little about what we do. I wanted to see if you’d be interested in having a conversation to find out a bit more.”

He also told us:

“If I know anything about the company or what they do - either from their profile or from previous interactions with them, I’ll include that within the first few lines of what I saw, just to show I’ve done my research.”

“I do usually get really good feedback from them. Even if people tell me I should consider asking certain questions or something, it’s opening a door for a conversation.”

Now, we know what you’re thinking. That’s a lot to fit into 45 seconds!

You’re not wrong. Jonathan admits he doesn’t always get it right the first time he records.

“There is a lot of re-recording going on! It takes practice to get the message right and condensed into 45 seconds but I’ve managed to get to a point where the majority of them are between 40 and 45 seconds.”

Who should you send voice notes to?

Depending on who your prospect is, it might be more or less appropriate to send voice notes. However, Jonathan has found that he gets better conversation rates off the back of voice notes, versus email.

“I use voice notes across the board, although I do find it’s especially effective when contacting someone who is also in sales, or heading up a sales team.” 📈

“They see what their team is doing daily, and they’re always being prospected to, so someone in this line of work appreciates you going out their way and doing something different.”

We’ve already touched on a couple of benefits, such as how voice notes can help you stand out in a saturated inbox of sales pitches, and are excellent for personalising your outreach.

What other outbound sales benefits has Jonathan gained from communicating in this way?

“I think it just intrigues people and cuts through the noise. You also get a chance to show off more of your personality.” ✨

“You can speak more naturally than you would in an email, it’s more conversational and you can bring across things in your tone and the way you speak. It’s very different from text-based outreach where things can be misunderstood or misinterpreted.”

“Voice notes are especially helpful in B2B sales or enterprise teams. When your prospects are constantly receiving messages, it just shows you’re willing to go the extra mile to be different and catch their attention.”

“Plus when you’re in this industry, people understand the amount of time it takes to personalise outreach. I think that’s why it works so well.”

With this long list of benefits, is it possible there’s a downside to using voice notes?

“You don’t get the time to ask questions about the company before booking a meeting versus if you’d been able to speak to them on the phone. A voice note is essentially a one-way conversation.”

“You know they’re interested because they've booked in some time for a meeting, but otherwise, you don’t have any other information about their pain points or how you can help to solve them.”

“You may need an additional conversation before, so sometimes I’ll book a call before the meeting as an extra step.”

As mentioned earlier in the blog, there is also the potential for your voice notes to have a less than desirable effect if your recipient feels like you’re reading off a sheet of paper or your message sounds rushed or insincere.

So unless you’re willing to take the time to get the message, tone and pace of your voice notes right, then you may wish to stick to other forms of communication.

Most of the advice here is common sense. Think about what you would wish to receive if you were on the other end of this!

You wouldn’t want to get a long, mumbling jumble of words that don’t really make sense.

So make sure you speak clearly. Record somewhere quiet so the prospect can hear you without distraction or interruption.

And remember, they don’t know you. So be sure to introduce yourself, while not going off on a tangent or diving straight into a sales pitch.

Give enough information for them to understand who you are and what you do, while keeping it short and sweet. 💡

“You have nothing to lose, just try it out! It will take time to get to grips with it, so practice before sending. Show your personality and use your natural conversation skills.”

For more tips and advice on B2B sales - sign up for Cognism’s newsletter, delivered every fortnight. Click 👇 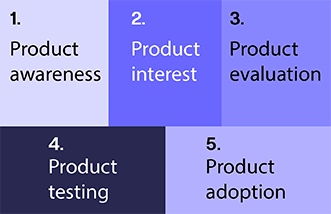 Dark social: What does it mean for salespeople?
Dark social doesn't just impact marketing. It can have an effect on the success of salespeople too! Click to find out what salespeople need to know.
View Outbound