The evolution of SDRs with Aaron Ross

The core role of the Sales Development Representative hasn’t really changed since the dawn of time - okay, a bit dramatic, but certainly since the position was cemented into the sales process in the 2000s.

The main objectives remain the same: let your potential customers know you exist and nurture them through the marketing and sales funnel until they become a customer. ✅

What has changed, however - quite significantly in fact - is the environment in which SDRs operate.

The needs, wants and expectations of the prospects.

The technology that is ever-regenerating the way we interact with one another, alongside the advancement of prospecting tools.

The sheer volume of noise and competition, tugging prospect attention in every direction. 📢

And with this changing environment comes a change in tactics. The need for a new approach in order to stay relevant, stand out from the crowd and ultimately reach your target prospects with the right message.

This is a subject that Aaron Ross, Cognism board member and sales development aficionado, is passionate about. For this article, we got together with him and picked his brains on how SDRs have evolved.

It’s not the end

Over the last few years there have been rising discussions about whether SDRs and cold calling are dead. 📞

Aaron has been open about his view that these predictions are false.

In fact, he believes the opposite - that actually, there will be more SDRs entering into the B2B sales space in the coming years.

Why is he so confident in opposing this popular belief?

Because up until this point, prospecting has been limited to tech companies or startups.

But these are not the only companies that can benefit from prospecting - most companies need to acquire leads, and he bets all will be interested in growing their revenue. 📈

“So, even “established” industries such as manufacturing or advertising, to name just two examples, could benefit from incorporating the SDR (or some version of the SDR) into the industry.”

In other words, Aaron believes that the role of the SDR has yet to go ‘mainstream’.

Another argument within this ‘is it the end/is it not?’ debate suggests that the technology available in today’s landscape replaces the role of the SDR.

This is another area where Aaron disagrees.

He believes if you were to replace the human aspect of sales, especially in the B2B space, you’d be left with prospects with a lot of unanswered questions. 🤷

“You’re essentially relying on the buyer to do all of their own research and know they’re a fit for what you offer. That’s a big ask.”

“And, with your AEs busy closing deals, do you really want them spending time disqualifying prospects that have only qualified themselves?”

“And what about those perfect buyers that don’t find you on their own?”

So with that said, let’s proceed with the assumption that SDRs are going to be sticking around for a little bit longer.

Keep reading to find out about how SDRs have evolved.👇

The changing landscape of sales

Anyone under the illusion that outbound sales isn’t in a constant state of flux would be wrong.

There have been continuous developments in the channels and techniques that SDRs utilise to get meetings.

Aaron asked us to think about it like this:

“Back in the day, sales might’ve involved knocking on doors or approaching people in the street.”

“As technology developed, this evolved into phone calls or emails.”

“And again, as the innovation continued, this became social media; LinkedIn, WhatsApp and more.”

“These channels will only continue to change and evolve in the future too.”

The core of what SDRs are doing through each of these channels is the same as always.

But the tools in their toolkit and the methods of reaching their audiences have had to adapt and grow over time. 🛠

Aaron went on to say:

“One of the biggest impacts on how SDRs have to operate as a result is to stay organised, and develop their own way to ensure they keep up with their prospects across all these different channels and touchpoints.”

This is also true of the consumer. There are more places to be reached. They’re wise to sales jargon. They’re conditioned to avoid anything that looks or smells like a salesperson.

It’s getting increasingly difficult to keep prospect attention. The second they get used to something new being deployed as a selling technique, they switch off.

The market is tired of selling and of being sold to. Any new, innovative method gets published, replicated, and then becomes noise very quickly. 🗣

Aaron sympathises with SDRs working in the current climate.

“I’d be shocked if SDRs aren’t feeling overwhelmed in some way, just because of the sheer volume of stuff they are told they need to be keeping an eye on and how difficult it is to get prospects to be receptive.”

The changing role of SDRs

Targeting has been an important aspect of sales for a while - after all, there’s no point trying to talk to someone about apples when they only want to buy oranges. 🍊

But now that there’s so much opportunity for SDRs to connect with prospects, honing down the number of people they invest time and effort in can prevent them from being overwhelmed.

In other words, out with the ‘spray and pray’, and in with the hyper-targeting.

A good rule of thumb? Don’t make the call if you don’t believe your product or service could help your prospect.

In addition, the world of ‘copy, paste, success’ is ending. You can no longer copy the actions of another SDR to get the same results.

You can’t even really rely on the same list or combination of actions you did the day, week or month before. You need to always be evaluating what’s working at that moment in time, and what’s not.

“If you look back even 30 years ago, you’d do your 100 dials a day and you’d have a very prescriptive day to meet your goals.”

“In the modern day, communication is so fragmented, even if you use a system to organise it. You need to be able to bring creativity and personality to whatever you do. You need to stand out from the barrage of other messages your prospects’ are getting.”

This is something that the SDRs we’ve spoken with at Cognism are all too aware of.

Our sales team holds regular training sessions on new channels and new methods of communication. Our reps are always looking for new ways to make their messages stand out from the crowd, such as using voice notes or video.

Aaron reiterates this by saying:

“I think that this is something that will only become more pronounced as time goes on. The people who can bring more creativity to their message and process will have more success.” 🎨

Sales expert Ryan Reisert weighs into this evolution debate with a bold suggestion for what should happen next.

“You should be getting your most experienced, senior staff making the initial calls.”

His rationale for this statement?

“With all of the noise, you need someone who knows what they’re doing, who knows how best to speak to prospects to be making the initial connections. That’s the hard bit.”

“Then once you’ve secured the next scheduled interaction, you could have someone else doing the canned demonstrations.”

“I’m not saying that all SDR jobs should be given to senior staff; junior SDRs can still be out on awareness missions, making prospects aware of content.”

“But making calls to try to get a prospect over the line and book a meeting, that’s hard. It should be done by the person with the most business acumen and communication skills in the organisation.”

Aaron touches on a similar point whereby he suggests that the sheer volume of opportunity very quickly creates overwhelm for SDRs. This can lead to decision-making paralysis and anxiety.

This is where traits like emotional health and intelligence (alongside overall experience) become so important in modern SDR roles.

A world of spectrums

Society is moving towards a more fluid and flexible approach to lots of aspects of life, and that includes the approach to work.

Aaron explains what he means by this:

“It used to be that the majority of prospects would work in an office. Now, you may be dealing with a mix of prospects who are in office, work from home or adopt a hybrid approach.”

“Some are very protective of their work-life balance and calendars in general, while others will be happier to make time to talk.”

“Then consider the spectrum of personalities involved, referring to either end of the line.”

“Nor do they all like to be contacted in the same way. Some will prefer text-based comms, some will prefer to be phoned. Others will like a combination across platforms.”

These days, any impression that there’s a one size fits all, canned method for success is being broken down.

What does this mean for SDRs?

It’s fostering a mindset of experimentation and testing. They have to work to keep their approaches fresh and effective, while avoiding time-wasting methods that have gone stale. 🧪

Advice to future or developing SDRs

Before we wrap up, we asked Aaron to give some advice to anyone early in their career as an SDR.

“Immerse yourself in things that can help you learn and develop your skills and creativity.”

“To some extent, you need to be listening and learning to what other people have done and had success with.”

“Not just podcasts or online articles, but try to meet other SDRs, managers, or other people in similar roles outside your own team, in different environments.”

“There is so much information to take in, but one of the best ways to stay on top of what's going on around you is to talk to other people.”

“Whether it’s a mentor or just peers, you need to have someone to bounce ideas off of and keep you on your toes.”

“Not to mention it can help with mental overload and overwhelm. It helps to keep you grounded, which is especially important as the chaos temperature rises.”

There’s also an argument for ensuring an efficient alignment between SDRs and AEs, such as working in pods rather than as individuals.

Wins are for the team, not any single person getting credit for a group effort. Aaron encourages SDRs to share knowledge and build a culture of support.

The future of SDRs

Aaron believes SDRs aren’t going anywhere. The importance of this role is only going to grow; in the future, there will just be more specialisation.

There will always be a need to contact prospects directly and schedule meetings, to monitor the different channels, to nurture leads and answer any important questions prospects’ have.

SDRs just have to be ready to adapt and optimise their approach, build their business acumen and upskill themselves in as many relevant channels as possible.

Get the latest and greatest B2B sales advice - sign up for Cognism’s newsletter, delivered every fortnight. Click 👇 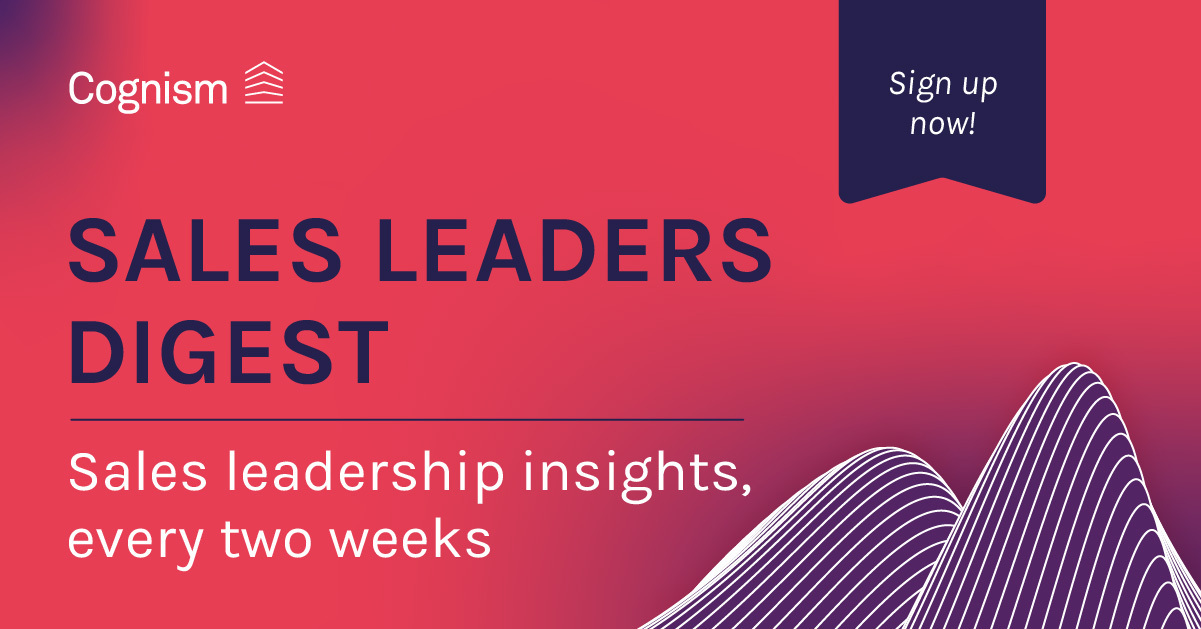 How to build sales cadences

These Stories on Sales

How to build sales cadences

You choose. We'll curate and send. Pick your newsletter today.
Sign up today