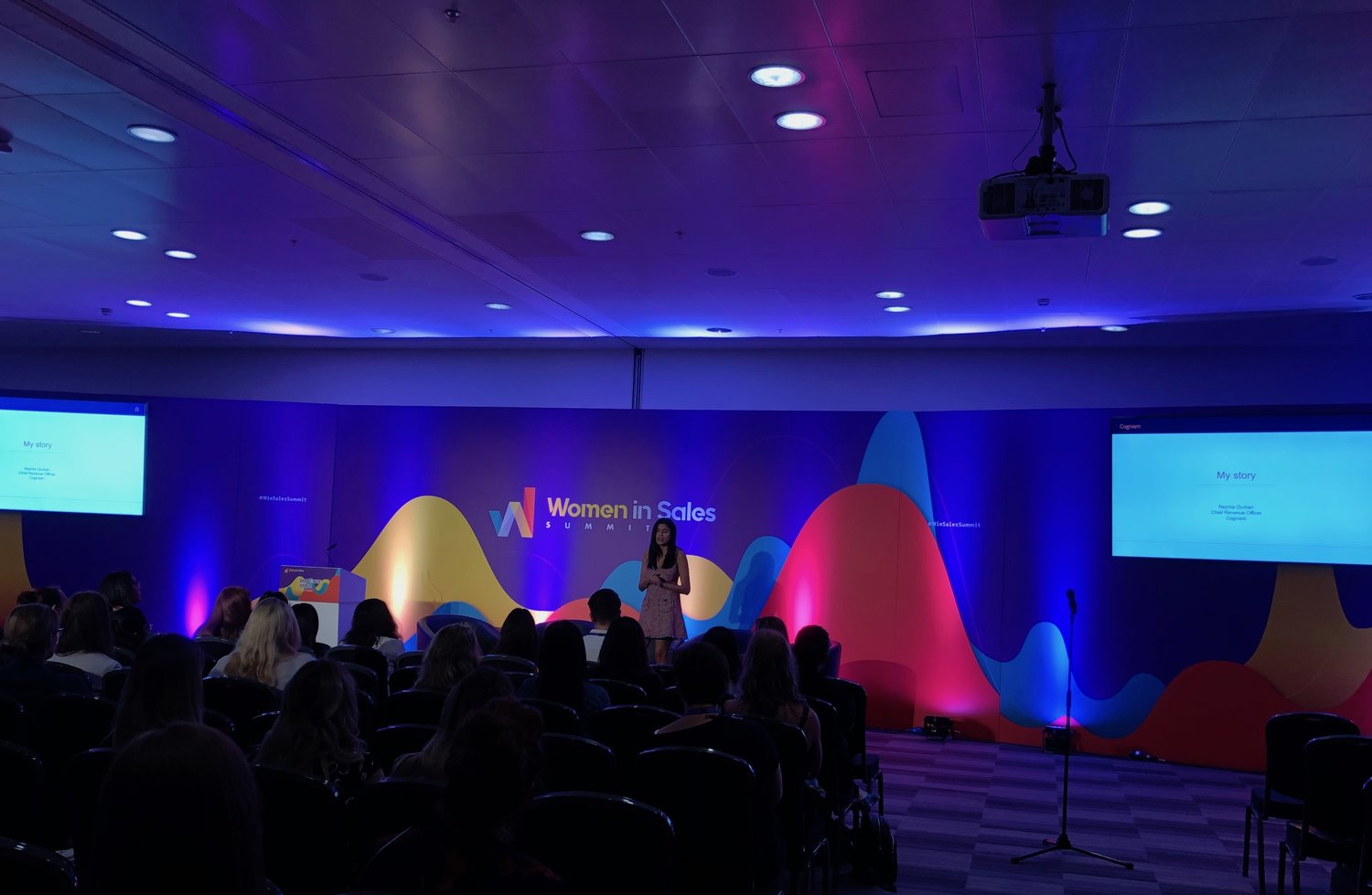 How I got here: breaking glass ceilings

We were live at the Women in Sales Summit yesterday and kicking things off was Cognism’s Chief Revenue Officer, Nazma Qurban. This talk was all about: How did you smash through the glass ceiling of the sales profession to deliver incredible results? This speaking slot was gratefully sourced for Nazma through the ISM.

Nazma opens the talk with a dive into her story, describing her journey up until this point. It all started when she was 27, living at home with her parents, having left her role in recruitment, which she acknowledges had not been a success.

For Nazma this was probably the lowest point in her career, and it was a chance to take stock of where she was and where she wanted to be. This led Nazma to the decision that she wanted to work in tech and more specifically, a start-up. So then the question was, what company and how would she be able to get a foot in the door? That was where Cognism came in.

When Nazma first met Cognism’s CEO, James Isilay, Cognism was just an idea. There were no roles at this point, not even an office, but Nazma recalls how she didn’t let this hold her back. Indeed, she jokes, James says he has never been chased so hard by a woman in his life! On checking her emails in preparation for this talk she wasn’t surprised to see that it was definitely the longest cadence of her career! And the most successful!

After Cognism received its first tranche of funding, Nazma was the first hire and became Head of Sales - she jokes again that this was a good example of start-up title inflation as she was not only the only person in the sales team, but the only other commercial hire!

This is where the hard work started. Nazma spent 7 months in a 360 role, finding and closing her own business, only once she had built up too large a pipeline for her to manage on her own, was she able to hire her first team member as an SDR. From here Nazma set herself a new goal - to get to a stage where she had built a sales engine that was so repeatable, she was no longer needed to close her own deals. A big part of getting to this stage was training and coaching her team to move up the ladder. 98% of the Cognism sales team are graduates and all promotions have come internally.

It was at this stage that Nazma became VP of Sales, with her focus switching from closing deals to strategy, building the team, and coaching.

Nazma has now moved onto part 2 of her journey, the road to becoming Cognism’s Chief Revenue Officer. Nazma explains that this was not straightforward, and despite having achieved all the goals she had agreed with her CEO to qualify for the role, there were still some significant hurdles for her to overcome. Nazma explains that on applying for the position, soon after, the company’s advisor, and Nazma’s mentor also applied. This was someone who had been CRO twice before, had a successful exit behind him, someone that was made for the role.

It is here that Nazma emphasises the importance of controlling your reactions to any given situation, and how vital it is that you have a defined vision of where you want yourself to be. The combination of these two things, alongside a realisation that she was not the exception, but the rule, empowered Nazma to keep focused and not be distracted from her goal of becoming CRO. It would have been very easy to drop out of the process and accept defeat, but instead Nazma prioritised learning and upskilling, focusing on expanding her knowledge of marketing and CS. This hard work, vision and mindset paid off. Nazma was appointed CRO in February of this year.

So what is the formula for this success? What are the things that you can do to take control of your own career?

Nazma sets it out in 3 clear points which she calls her winning formula for success.

So how does this work in practice?

Point 1 is all about acknowledging that you are not special, you may get lucky in your career, you may get great opportunities along the way, but what makes you truly successful and makes this success stick, is working harder than anyone else.

Point 2 is about creating a vision of a better version of yourself. This is something which you should be working on daily, and Nazma has a structure for creating this which she is now sharing. It is broken down into:

By working through this exercise you can create a clear picture in your head of a better version of yourself that you want to work towards every day. This was very important for Nazma when it came to becoming Chief Revenue Officer.

Nazma has now moved onto point 3 of her equation for success. This is about being mindful. She refers to her favourite adage, that 10% of life is what happens to you and 90% is about how you respond to it. For Nazma a way of practising this in her daily routine involves taking time every morning to collect her thoughts, journal the day ahead, and make sure she always starts with a positive outlook, leaving behind any negative emotions attached to the day before.

And that’s it! If you are looking for success in your career, follow these 3 principles, enjoy the success that follows, and break through your glass ceiling!

These Stories on Sales

You choose. We'll curate and send. Pick your newsletter today.
Sign up today